Every year, hundreds of thousands of high school seniors make bad choices about where — or whether — to go to college. Some who would excel at top-ranked institutions opt for second-tier institutions. And more than 200,000 students who have been accepted by colleges never enroll.

The good news is that, for students in both groups, a dollop of information or a helpful nudge can change their decisions.

Many high achievers from poor families don’t even consider elite schools. Scared off by the sticker price, they enroll at community colleges and less selective institutions instead. That is one reason 72 percent of students at the most competitive universities come from families in the top quarter of the income bracket, while students from families in the bottom quarter make up only 3 percent.

Without help from knowledgeable guidance counselors or visits from college admissions officers to their high schools, these students don’t realize that, with their credentials, they would almost certainly be admitted to a better institution and receive a financial aid package so generous that it would actually save them money.

Getting this information in these students’ hands can make a world of difference, as the economists Caroline Hoxby, at Stanford, and Sarah Turner, at the University of Virginia, have shown. They tracked 40,000 seniors who scored in the top 10 percent on the SAT or ACT and most of whose families’ earnings fell in the bottom third of the income distribution. Most received packets telling them how to identify schools that matched their interests, with information about those colleges’ academic offerings and graduation rates. They also were provided with estimates of what it would actually cost them to attend a range of different schools. The control group didn’t get any of this material.

The impact was astonishing. Those who received the packet were 78 percent more likely to be accepted by a top-ranked university, where the overall graduation rate was 15 percent higher than at less selective institutions. When the information was accompanied by a waiver of application fees, the effect was even greater. A follow-up study found that these students knew more about whether the academic programs of the schools they considered were a good fit for them. And the intervention cost less than $15 a student.

An equally serious problem is the number of high school graduates — as many as 40 percent in some urban districts — who have been accepted to college but never make it to campus.

This behavior may be because of a change of heart or a change of circumstances. Often, though, the explanation is simply a lack of knowledge regarding what steps the students need to take after they’re accepted. Unlike their well-off peers, cosseted by counselors and parents, these young people are typically left to their own devices. They are understandably daunted by navigating the passage between high school and college — completing financial aid forms, submitting grades, picking courses and signing up for orientation. The phenomenon is known as summer melt, and it’s a big reason well-intentioned attempts to enroll more poor students usually fall short.

Counseling is one way to close this gap. A study conducted in Fulton County, Ga., found that individual advising raised college enrollment rates among low-income students to 72 percent from 64 percent. But counselors, especially in poor high schools, already have oversize caseloads — upward of 500 students — and little time to focus on those who have already been accepted to college.

A new approach — a text-messaging campaign directed at potentially vulnerable students during the summer, customized to remind them of the deadlines set by their intended college and directing them to counseling help — can reduce summer melt at a fraction of the cost. In his book “The 160-Character Solution,” Benjamin Castleman, an education professor at the University of Virginia, details this light-touch strategy.

Using texts is a smart move. This is how teenagers communicate — nearly two-thirds of them send texts daily, far more than talk on their phones or rely on email. “Hi, Alex!” a typical text might say. “Have you chosen your courses yet? Deadline is 8/15. Need to register? www.tinyurl.com/courses. Need help? Text back to talk w/ an adviser.” In a pilot study that enlisted nearly 5,000 students, 72 percent of low-income students who received the message followed through and enrolled in college, compared with 66.4 percent who didn’t get this information. The cost? Less than $7 a student.

The same approach can keep college freshmen on track for their sophomore year. In another study, freshmen who received text reminders to submit their financial aid forms and keep up their grades to remain eligible for aid were 20 percent more likely to stay in college than those who didn’t get these nudges.

Deliver this assistance to high school seniors nationwide, and thousands more poor students will make it to college. Professor Castleman is now working with the Texas Higher Education Coordinating Board and the Common Application to deliver texts about aid and college choice to over half a million students. “Can we go from 50,000 to 500,000 — to five million?” he wonders.

Last summer, Michelle Obama started a similar program called Up Next, aimed at getting students to apply for college. It walks them through the process, from prepping for exams and making an informed choice among schools to filling out the federal student aid form, called Fafsa. Text messaging is one of its main tools.

Colleges and universities need to join forces to encourage poor, high-achieving students to attend top-flight schools and nudge accepted students to enroll. Doing the right thing for students has never been so cheap.

The StudentTracker reports – which show us where our graduates go to college, how long it takes them to earn their degrees, whether they transfer schools, and more – have served as a critical tool to measure the success of this initiative. They provide accurate and timely data to help us monitor and evaluate our work and the work of our districts towards this common goal.

With a large number of stakeholders participating, it was necessary for our schools to receive training to increase awareness and knowledge of how to read and utilize these reports. The Clearinghouse enthusiastically supported us by sending a team this September to provide multiple in-depth, hands-on workshops over three days to more than 400 participants, including diverse audiences of county and district office personnel, high school counselors, and high school administrators. The willingness and professionalism of the Clearinghouse staff were exceptional. The presentations were engaging. Participants left the workshops eager to utilize the reports to assist them in their college readiness work.

Our relationship with the Clearinghouse is beyond business. Clearinghouse staff care deeply and share our commitment to positively impact the lives of students here in Riverside County. 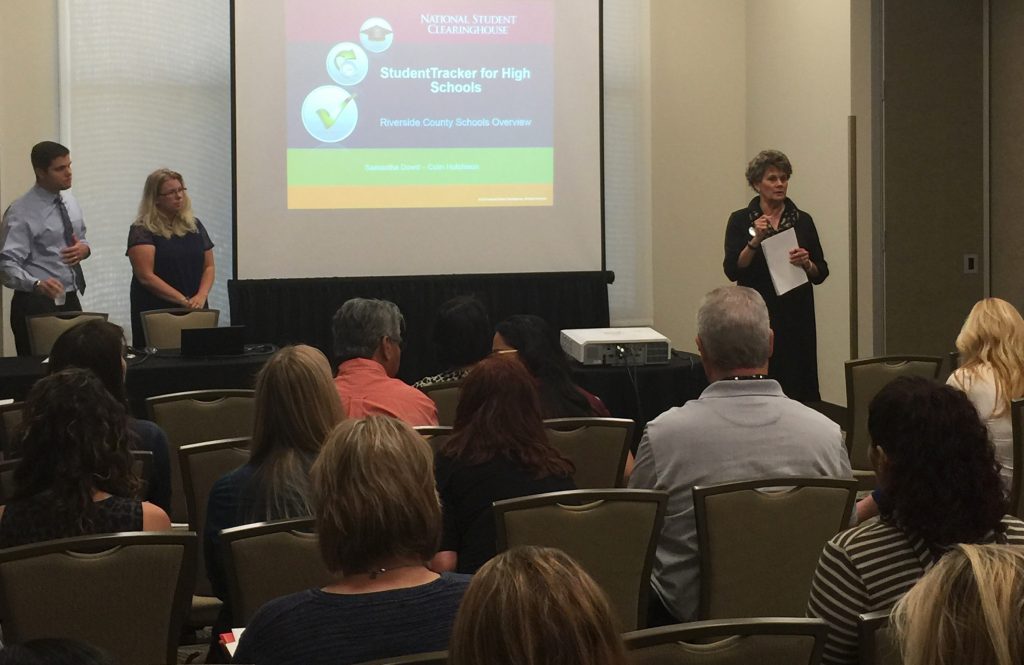