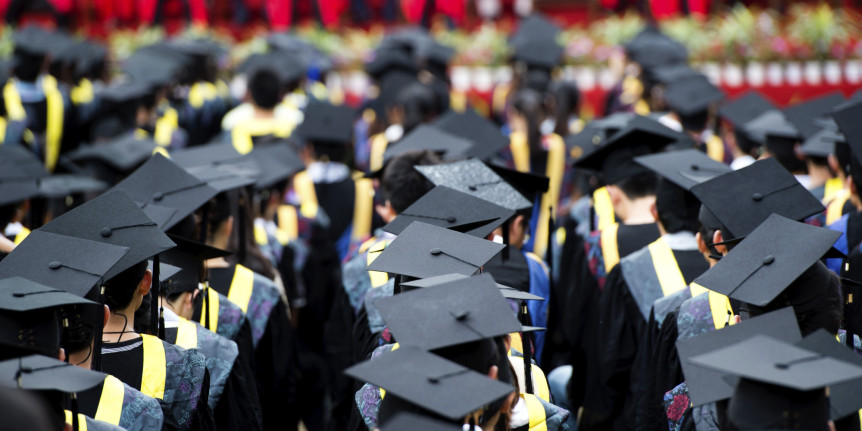 A structural shift in the job market following the most recent economic recession has radically changed the composition of the American workforce, with four-year college graduates for the first time comprising a larger share of the workforce than those who got a high school diploma but don’t have a college degree, according to a report released Thursday by the Georgetown University Center on Education.

Researchers at the center found that out of the 11.6 million jobs created in the post-recession economy, 11.5 million went to people with at least some college education. Of those jobs, 8.4 million went to workers with a bachelor’s degree or higher. People with a high school diploma or less education landed 80,000 jobs in the recovery, the report said.

“The trend away from an economy that was anchored in high school to an economy anchored in post-secondary education and training has accelerated in the last two to three recessions,” said Anthony P. Carnevale, director of the Georgetown Center and lead author of the report. “If you can afford to send your kids to college, this is good news. If not, it’s bad news.”

People with at least a bachelor’s degree now make up 36 percent of the workforce, the largest share on record. Those with a high school diploma but no college education make up 34 percent of the working population, while people who have taken some college classes comprise the remaining 30 percent.

The recession laid waste to blue-collar and clerical jobs, shrinking a segment of the labor market that has been in decline for decades. Industries, such as manufacturing, construction and natural resources, moved from employing nearly half of the workforce in 1947 to just 19 percent in 2016, according to the report. Manufacturing added the second-highest number of jobs — 1.7 million — in the recovery, though the sector still has 1 million fewer jobs that it did before the recession began. Similarly, the construction sector, which added 834,000 jobs during the recovery, remains 1.6 million jobs short of its pre-recession numbers.

Office and administrative support positions, the largest occupational group in the American economy, lost 1.4 million jobs during the recession and recovery because of the rise in digital information storage and automation, the report said. These jobs were a primary source of work for people with limited education, which is why the disappearance of this work is hitting that population so hard, Carnevale said.

The report, he said, “reaffirms the trend that continues to leave Donald Trump voters behind. They tend to be in specific industries, high school educated and remembering that in the 1970s they were the dominant workforce. This is a new world.”

The recovery has been a boon for managerial and professional workers — those in healthcare, financial, education and government services. People in those fields went from 28 percent of the workforce in 1947 to 46 percent of the workforce today. Consulting and business services added the largest number of jobs in the recovery, 2.5 million. Healthcare professionals and technical occupations pumped 1.5 million jobs into the economy.

The changing landscape of the American workforce has far-reaching implications for higher education. The zeitgeist of the moment insists educational programs should be aligned with the needs of the labor market for students to get the most out of their degrees. Policymakers have at times derided liberal arts studies as having little value in the job market, forcing some colleges and universities, particularly liberal arts schools, to defend or even alter their mission to heed the call for more graduates in science, technology, engineering and math (STEM). But the data contradicts that overall view: college graduates across the board have the lowest unemployment rates.

“There is a tension there,” Carnevale said. “It is clear in the minds of most Americans that the enduring mission for colleges is to promote human flourishing, not just to make foot soldiers for capitalism.”

In the era of five-figure student debt, it is increasingly difficult to argue against the importance of sustainable employment, and graduates in STEM fields have the highest earning potential. An earlier Georgetown study found that the top 25 percent of earners with education degrees can expect to make as much as the bottom 25 percent of people with engineering degrees, even mid-career. Getting an advanced degree will improve educators’ prospects but won’t do much to narrow the wage gap with engineers, the study said.

“Our higher education system is basically a $500 billion machine with no operating system from the point of view of the economy,” Carnevale said. “There is more leaning toward employability as the ultimate standard for college in America, and that always means, in the end, the more affluent families get both education and training, while the less affluent just get training.”